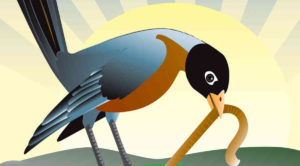 Years ago I swore I would never be caught going to an early bird dinner. The whole idea of going to eat early to save a buck just nauseated me, as in made me lose my appetite. Now I guess I don’t have to worry, because it would appear that the Early Bird Special is going extinct.

Go to the heart of the retiree republic in South Florida and you’ll see that restaurants are near empty around 4 pm. Early bird specials are for old people. Boomers don’t want to be thought of as “old” so it’s goodbye early bird special.

Back in 2009 it looked like the early bird dinner was making a comeback but it was just a brief flicker of a revival. Restaurants were doing anything to fill seats in non-peak times and the early bird special targeted anyone pinching pennies, not just the grey heads.

Restaurant owners can see that baby boomers are not taking the bait (sorry, the whole worm thing can do that to you), but they have not given up on the concept. New euphemisms have sprung up for it however. Sunset dinner and twilight dinner are now more common terms for dinner at 4-5 pm. The name change has not lured boomers back to the table. Millennials who are scraping by as contract employees without benefits are the more likely customers for bargain meals these days.

The chain restaurants have found another way to get boomers into the seats – namely discounts. There are all sorts of deals for 2-person dining as well as reduced portion specials. Applebee’s gives the 60+ crowd 10-15% off, Carrabba’s gives 10% off to AARP members, so does Chart House, Dairy Queen, Subway and Friendly’s. Dunkin’ Donuts will give AARP members a free donut with the purchase of a large beverage.

The extinction of the early bird special is just one more sign that baby boomer retirement is nothing like mom and dad’s version of the golden years. Boomers don’t want to identify as “retired” so the last thing they want is people gawking at them eating dinner at 4pm. They are out windsurfing or roller-blading and they will eat at a civilized 6:30 pm, thank you very much. Of course, they may still be in bed by 8:30 so at least that sign of being a senior hasn’t changed.