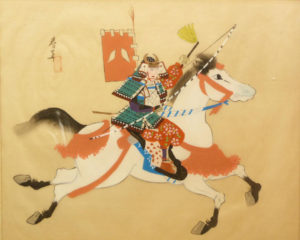 F  I  C  T  I  O  N   It was a dimly lit sushi restaurant. There were little candles on each table, but except for the candles it was dark. The sushi chef stood at attention behind the bar, flanked by one short waitress, one tall waiter, and an perpetually smiling host.

We were literally outnumbered as there were only two of us and four of them. Maybe five if there was a dishwasher in the back room. Not good odds. I eyed the door discretely, measuring how many steps it would take to make a run for it. I knew I could make it but I wasn’t sure about my companion.

Calm down. Forget about it. Enjoy the moment, right? Think positive thoughts. We came here for a good meal so why not relax and study the menu. Have some hot sake, loosen up. There was a long list of familiar sushi dishes…sashimi, nigiri, California roll, caterpillar roll. There was a nice selection of noodles, soba, udon and ramen, plus some tempting tempura and teriyaki dishes. And potsticker appetizers…everyone likes those. It all looked good. Things were turning around here.

Then my eyes drifted down to the bottom of the menu. What’s this? In large capital letters that one could not miss. It was an unmistakable warning that filled me with foreboding thoughts.

What does that mean? Why the harsh tone? What had happened that was so dreadful that management felt the need to boldly print this admonition at the bottom of the menu? Had there been a separate check massacre? A table of six ordered 15 different dishes and then insisted on separate checks for each of them. Business was so good you could turn away customers because they insisted on having a separate check. There were only two of us in the restaurant at 6:30 p.m. What would happen if we insisted on separate checks? I had visions of sushi samurai warriors with very sharp knives coming out from behind the bar. Maybe on horseback, although I would say that would be most improbable given how small the restaurant was and how close together the tables were. Difficult to maneuver on a horse, but not impossible.

Where was I? Right, the separate checks. I decided the best course was to play along, order our food and then when the check came – not going to happen. I was not going to fight the system. The threat of samurai warriors was too great.

I wonder how they are going to react when we ask them to split the bill on 2 credit cards. There was no warning about that.