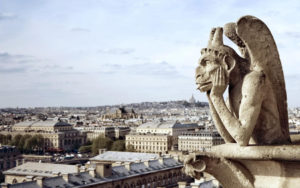 T R A V E L   I had a lot of fun teasing the French when I lived in Paris in the 70’s. All I had to do was invite friends over, serve four courses instead of seven, make pancakes for lunch, put the salad at the beginning of the meal instead of the end, or – worst transgression of all – dump the meat, potatoes, vegetables and salad all in one plate, American-style, and say, “Voilà!”

It was easy to be a rebel over there, something I’m good at as long as attitude counts more than subversive action. What can I tell you? It was the spirit of the times. I never burned any bras, but, on the other hand, I didn’t wear any either.

In the playground I took off my shoes and squatted in the sand alongside my baby son. And slid down the slides after him. The other French mothers were too busy admonishing their offspring not to get water from the Place des Vosges fountains on their leather-trimmed “playclothes” to have my kind of fun. The occasional father would guide his child up the stairs of the slide like this: “First place your right foot on this step, lift your left foot up x centimeters, now pull yourself slowly up!” The poor child would lose all taste for the adventure ahead and reap the scorn of the other little ones waiting on the steps behind him.

Of course I wore jeans with an embroidered butterfly I had stitched on to cover a hole that was – come to think of it – suggestively positioned on my thigh. Let the françaises prance in their heels and summer dresses. I had scarves in my shoulder-length hair.

Still I looked French enough pushing a baby carriage for one confused American tourist to continue to talk to me in French even after I said, “Listen, you can speak to me in English!”

Other outrages of mine – putting the light on during the day in my darkened apartment before the appointed (?) hour, rinsing dishes with the water running, “insulting” a clove of garlic by not slicing it daintily enough, boorishly putting a container of milk on the kitchen table (instead of a creamer), oh, and picking up my son whenever he cried instead of letting him “make his lungs.”

Not exactly a march on Washington, but I did my darnedest to stand up for the good ole American way of life!

Janet Garber’s satiric novel, dream job, wacky adventures of an HR Manager, available on www.janetgarber.com. She’s working on a second novel about a Franco-American couple living in Paris in the 70’s.