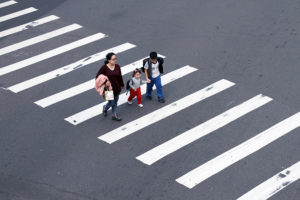 F I C T I O N   Rosita’s fifteen-year old son says, “Mom, seriously, no one wears that color.” Rosita pushes her arms through the sleeves, trying not to show how nervous and shaky she is feeling. Her son, Jonathan, is tapping a pencil on his teeth and it takes all of her fortitude to not say something. His dad, Jerome Anthony Fudge, had the same habit. Click, click, click; pencil against teeth. What Rosita really wants to do is grab it from her son and throw it against the wall. Instead, she continues adjusting the fluorescent orange XXL hoodie. Why, she wonders, would they send her, 5’1″ and 120 pounds, an XXL?

Rosita met Jerome in high school, immediately got pregnant, then married, and now at age 32 is the single mother of a brainy teenager who is clueless about how she feels. Jerome stays in touch with Jonathan, sends him money, a new laptop every few years, and pays the tuition to the genius school his son attends. Two separate lives coexist and Jonathan navigates the middle without bringing in any crossover complications. Rosita dearly loves her son for that.

Being a traffic guard was not how a young Rosita de Jesus had imagined herself as a grown up. She was a fashionista in high school, making her own clothes and using all the style sense her grandmother and mother bestowed. Rosita planned on going to college in New York City and then along came Jerome. She doesn’t remember even caring that much about him but he was nice enough and seemed like an OK boyfriend. Everything changed when she found out she was pregnant. He was vague and afraid. It didn’t take very long for his family to intervene. The marriage lasted 2 years and 2 days and then Rosita and Jonathan were alone. The Fudge seniors paid for an apartment, pre-school for Jon, and most of what cost only money. Their friends suggested paying off Rosita but in fact they call her an “employee” and send regular paychecks; just as they do to their gardeners and staff.

Today Rosita knows the eye-catching orange sweatshirt might keep her, and a line of kids crossing Mulholland, from getting hit by a speeding Porsche. She feels bitterness eating away at her and resolves to be more positive. There is a teenage girl crossing with the younger kids, probably someone’s older sister, who looks at Rosita with pity. Rosita wants to say, “Be careful” but knows that won’t ever really be enough. 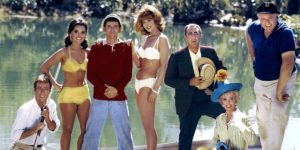 A R T S  There was an endless parade of silly baby boomer sitcoms. The best/worst is arguable, but the most iconic is clear. None reaches the pop culture television status of Gilligan’s Island.

Virtually everyone, including the creator’s agent, panned the idea before it debuted. The then-president of CBS West Coast remarked: “I thought it was a stupid show. Nobody liked it.” The network brass complained all the way to the bank.

The sitcom had solid ratings from 1964-1967 and attracted even more viewers in syndication, becoming one of the most re-run television shows. But wasn’t this at the same time that baby boomers were in “serious” rebellion against traditional values?

Hollywood legend Sherwood Schwartz said that he envisioned the castaways to be a microcosm of society who demonstrated how very different people could come together to help one another in a crisis. Who knew? It was a serious counterculture theme in clown-face disguise; maybe that’s why boomers dug it, even if the attraction registered only a subconscious level.

Schwartz wrote an “exposition” theme song—a music opening and summary repeated on each show—that told the complete story premise. Complete it was, the longest such song in television history. Schwartz overruled his writing staff who didn’t care for the idea or lyrics.

Hollywood gods work in mysterious ways. Schwartz wanted Jerry Van Dyke (Dick’s brother) to play the goofy, inept Gilligan. Jerry thought the show would never fly and chose instead to star in My Mother The Car, which barely made it through one season and is often judged the worst television show ever. Bob Denver’s role as beatnik Maynard G. Krebs on Dobie Gillis had just ended, and he jumped on the chance to be Gilligan, who was basically Maynard without a goatee.

A young Dabney Coleman auditioned for The Professor. Carroll O’Connor (Archie Bunker) tested for the role of The Skipper, which went to grade-B movie cowboy Alan Hale.

Jayne Mansfield turned down the role of Ginger, which fell to Tina Louise, known for serious (sensual) acting parts. There was a running battle between Tina and the producers over everything from Ginger’s personality and status to her costumes. She refused to go to Gilligan reunions and complained later that the role had destroyed her career as a serious actress, which gives new meaning to the phrase “whatever was she thinking?!”

No less an actress than Raquel Welch lost out to Dawn Wells for the character of Mary Ann. Dawn was a former Miss Nevada. 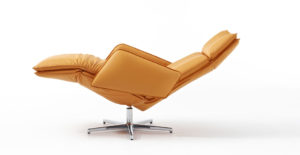 E  S  S  A  Y   Great news! Baby boomers are getting face lifts in record numbers, but even better than that, they have spurred a revolution in recliner chair design. That’s right, recliner chairs have gotten their own face lift.

Out of fashion are the big and bulky recliners your parents might have favored. They never fit in with your sleek décor anyway. But now that baby boomers are ready to recline, they want something more aesthetically pleasing and the furniture industry has responded.

A little history might be helpful here. La-Z-Boy (there’s something so perfect about that name) introduced the recliner in 1928. Apparently it was an immediate and long lasting hit with lazy men, and since they were often bought in pairs, there must have been a decent number of lazy women conjoined with their lazy mates.

The new and sleeker recliners not only have a smaller footprint, some are equipped with device charging stations and beverage coolers. They have even begun to motorize them so that the recliner will stand us up when we’re ready to get out of the chair (but why would we want to get up?). It’s not hard to imagine recliners that come with IV drips and other hospital-like features so that aging boomers never have to get up out of their chairs.

Four out of 10 recliners sold in 2014 were sold to baby boomers. Face it. Our generation is ready to get off its feet and stay off. But we want to do it in style. No more hiding the recliner. We want it out in the open for all to see and it has to look attractive. As usual, whatever boomers want, boomers get, as manufacturers clamor to please us.

Still, the old boxy recliner models are not going away. La-Z-Boy representatives say that they will never stop making the traditional recliner. So if you’re not jumping on the latest “sleek recliner” trend, La-Z-Boy can still accommodate your lack of fashion sense.

Either way, boomers appear ready to take this all lying down.