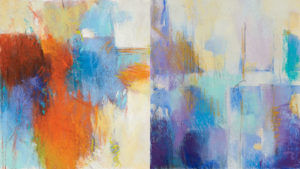 A R T S    By gallery standards the canvas was rather compact, about one by two feet; painted in the horizontal format favored by landscape artists. It was possible to pass by without it making an impact though viewers who happened to pause were rewarded by a moment of exhilaration and possibly even the light-headedness associated with drinking Champagne. The first time I visited the gallery I walked right by the work. Later, at a party, I heard the critic, Masi Clarkson, talking about ‘effervescence’ and the ‘ethereal quality of light.’ The visual image had wormed its way into my subconscious; I knew exactly what piece he was talking about.

I went back to the gallery at the end of a harried day. It was raining and the wet afternoon walk down the street and up a steep flight of slick stairs nearly made me change my mind. I entered through the stone entryway and ahead into the gallery. There were a few diehards left from day visits. The after-work group, often there as much for the wine as the art, had not yet left their offices. Later they would fill the gallery with the murk of a hundred conversations. The smell of Chardonnay spilled from plastic cups onto the wood floor would mingle with expensive perfume, the scent of fancy coffees created by street venders in their kiosks, and the sticky odor of weed.

My second visit coincided with being in a literal drought with my own art. Nothing was working. There is only so much inspiration one gets from outside the brain and eventually the thought occurs that maybe there is nothing new to say with paint. I wait, with no shortage of anxiety, for the return of the muse. Visiting galleries and art museums can jiggle loose some creativity but there are no guarantees.

I approached the painting, hung midway down the chocolate colored wall, and was surprised and happy to have it to myself. Is that a face? Where did that amazing color come from? What’s behind the image? That is a face! I stood there dumbstruck, squinting and weaving my head side to side as I tried to identify what I was seeing. I was so drawn into the work, time stopped until I heard chattering behind me. A mom said, “Keep going, this one’s too hard for you to understand.” “Mom, that’s a face!” “No, I don’t think so, what a weird color, the artist must be depressed” she said. “I like how it looks like there is a light behind the color” said the kid. “No, artists try to trick people into thinking there is something to their art. Most of the time there isn’t. Artists are weird and they think abut things in a weird way. Let’s go. If we hurry, we can make it to the gift store and I’ll buy you that book about the color wheel.”